I feel like I should put some sort of introduction on this… Following is a letter I was asked to write for the courts regarding the guy that stalked me.  Parts have been removed to protect me and the people involved…. Somethings only the devil and you should know about sort of thing.

Anyway, I am publishing this in hopes that it proves that YOU can overcome anything.

I have tried to write this statement at least a dozen times. I have found it hard to put into words all of the feelings that still crash around me, daily, because of the actions D took towards me over a year ago.  D’s actions stripped me of my life and left me jobless, homeless, traumatized and only a shell of the person I once believed myself to be.  I am not sure if I will ever be able to communicate clearly the fear and stress that he brought to me, but I want to try, I want someone to know what he did to me, and why I have not been able to sleep for over a year.

The first time I ended my relationship with D he called me over one hundred times, and texted me just as much, if not more.   I had to leave my home and find comfort and safety at a family member’s house because he was threatening to have me hurt.  I was under the impression that all of his psychotic behaviors were due to his drug use and told him that I would stay with him if he entered into a residential treatment facility.  Three days later, he agreed.  During this time, I stayed with a friend because I was afraid that D would physically hurt me at my home (which he had done on many occasions prior to his treatment).  D stayed in treatment for only two weeks and convinced me that he was sober, and that he would never hurt me unless he was using methamphetamine.  We set up boundaries and I moved back into my home only to have him show up and refuse to leave after the first weekend he was out of treatment.

In January of 2011, after I told D, repeatedly, that he was no longer allowed at my home and that I would call the police if he did not leave he smashed my phone on the wall next to my head, making it impossible for me to call for any help.  That night D  forced me to be a prisoner in my own home, making me sit on my sofa for over three hours while he physically abused me and verbally assaulted me.  After he left for work that afternoon, I called a friend to come and take me somewhere safe.  The next day I went to the Sherriff’s office and filed a domestic abuse report so that I could get an emergency protective order.

Having the deputy take pictures of my bruised body was humiliating.  It is heartbreaking to stand in front of someone you do not know and have them see what damage a “loved” one has done to you.  The bruises up and down my arms were dark and prominent enough that one could see D’s palm print.  I was ashamed that anyone had to see that someone had hurt me so badly.

The protective order was not enough to keep D from stalking me at my work, friend’s homes and my own home.  While I took a few days off work to file the protective order and allow my bruises to fade I got numerous reports from my employment that D was in the parking lot, had entered the store numerous times, and was sitting in an adjoining parking lot.  During this time, D called one of my friends and said that he would go into my work and kill me and “everyone else”.  In order for me to protect my co-workers and myself, I had no choice but to leave my job.

I stayed with some family and friends for a while before going to my home to gather a few more belongings.  When I got to my home my front door had been smashed, things in my home had been gone through, and a letter that D had written to me was placed in my jewelry box, a place where I never kept letters.  The feeling of sickening dread that swept over me, and still does when I think back on this, was and is overwhelming.  It is impossible to describe how gut wrenchingly awful not being safe in your own home feels.

During this time not only was D breaking into my home, but he was also text messaging me, leaving psychotic threatening voicemails, emailing me, contacting me on Facebook, contacting me through Yahoo chat, and creating YouTube videos directed at me and my family.  The e-mails D sent me cited domestic abuse website statistics stating that most women are murdered by their partner after leaving the abusive situation. His chats claimed the same and grew increasingly threatening the more I ignored him.  He would text me over 100 times daily, and call almost as much.  He directly threatened me and my family through text messages, a video he posted on Facebook, and conversations he had with associates of mine.

Because of the past physical abuse and verbal abuse I never doubted that D would harm me or kill me if given the opportunity, especially if he were high.  I moved out of my home and in with a family member so that D could not find me, and so that I would not be alone.  His threats were so real and so clear that I found myself sitting in the dark, crawling on the floors, and not leaving the house in fear that he would see me and kill me.  D may not have ended my life, but he destroyed every part of it within a few weeks.

Once D was arrested for stalking charges, I believed that would be the end that he would take me seriously enough to never harass me again.  That was not the case and he sent me letters from jail, and once he bonded out he left a card in my mailbox at my old home, and continued to make YouTube videos directed at me, and send me “anonymous” messages via chat and texts.  The overwhelming fear and crushing realization that I would never be rid of him was devastating.

As much as I would like to report that I have been able to regain the power over my life that D took from me, that is sadly not the case.  As I stated, I had to leave my job due to his behaviors, which in turn caused my home to be foreclosed on as I was unable to make my mortgage payments during this time.  I am still plagued with anxiety attacks, insomnia and when I am able to sleep horrible nightmares of D murdering me.  He took away any sense of safety I ever had, and stole any self-confidence I had in living a powerful and productive life.  I still have not been able to find gainful employment; I have been diagnosed with Post Traumatic Stress Disorder and have had to spend countless hours in therapy learning how to function in society once again.  As distraught as I have been over the damage that D did to me and my life, the worst is seeing how it has affected my personal relationships.  Many of my friends no longer know how to talk to me, and my family will always in one way or another worry about me and my safety.

My hopes in writing this statement are simple; to move on, to put all of this behind me, and finally start living with the knowledge that D cannot hurt me again.

Every Abuse Survivor that has found Their VOICE 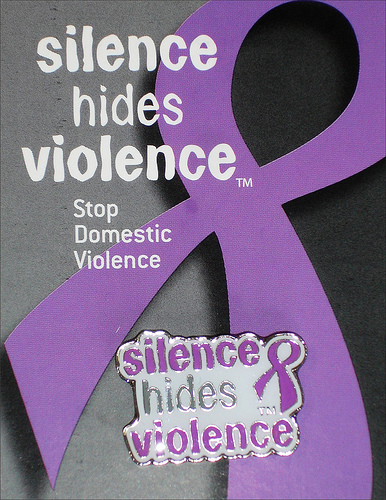